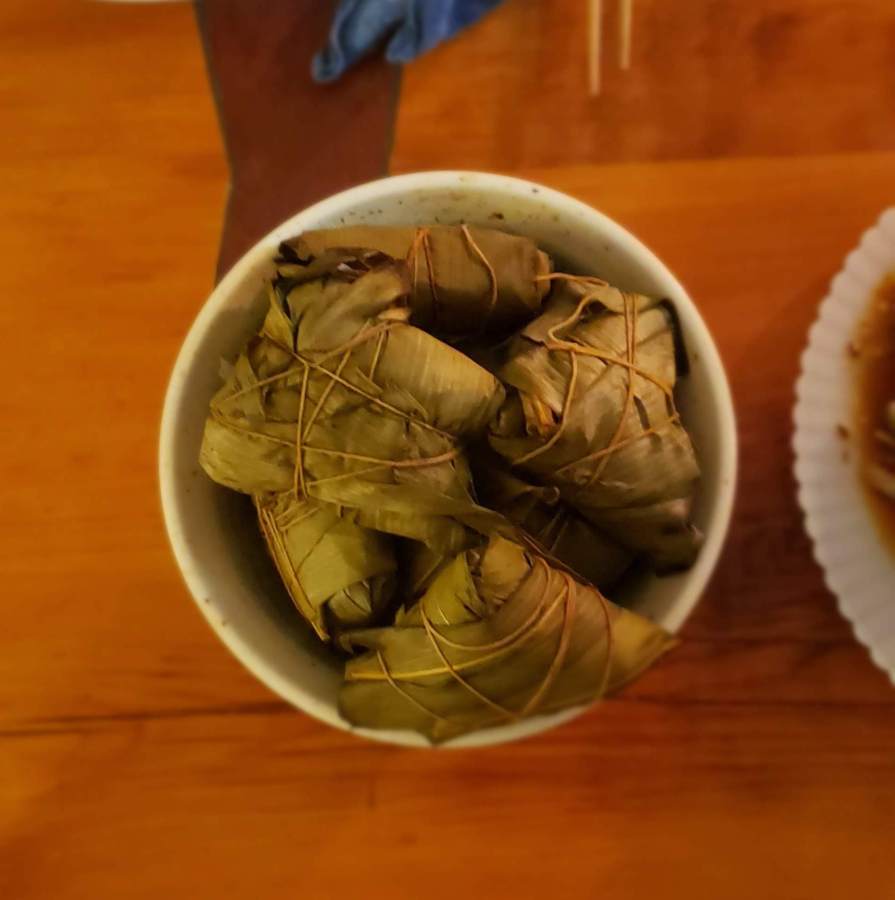 A Whole Grain, Plant Based Alternative to the Dim Sum Classic

Are you quarantined due to the increasing spread of COVID-19? Are you looking for a project that will challenge your motor skills and intellect, pass a few hours, and expand your cultural horizons without leaving your kitchen? Look no further.

Growing up, my mom, my brother and I would venture into Boston’s Chinatown to eat Dim Sum at Chau Chow City. We feasted on har gow, spicy head-on shrimp, silken tofu with ginger syrup, and something we called “that sticky rice in the leaves.” I never knew what kind of leaves they were (it turns out they’re usually bamboo, although other leaves such as lotus or banana are also used), but I loved unwrapping them to reveal fragrant glutinous rice, slightly sweet and studded with savory bits of Chinese sausage and shitake mushrooms. In the pre-Corona era, I bought them at Deluxe Food Market on Elizabeth Street, where the trussed bundles perch on top of a chrome buffet line, above trays of fried buns and tofu stew. I’ve sample varieties filled with soft boiled peanuts and dubious gelatinous meats, or sweet chicken and hardboiled egg. I don’t think too much about what’s inside, or how long they’ve been sitting at that temperature, I just unwrap and devour.

Zongzi, or sticky rice dumplings, are a traditional food for the Chinese Dragon Boat Festival in late spring. All these years that I’ve craved them, I never really considered making them, until I read a recipe for glutinous rice dumplings in Fuschia Dunlop’s The Food of Sichuan (yes, I’m obsessed). I started to wonder how difficult it would really be to make them, and if I could make a nutritious, whole grain version, sans suspicious animal parts.

Using this recipe as a guideline and this video as a wrapping tutorial, I set about making a version using wild pink rice, black eyed peas, peanuts and mushrooms. Wrapping them was tricky and I wound up using extra leaves to secure them, so I included 10 extra leaves in the ingredients list. I found that my version needed a little extra flavor boost, so after unwrapping, I drizzled them with a little bit of soy sauce and sesame oil, which made them absolutely delicious. This dish is essentially just rice and beans with mushrooms, but it feels fun and exotic to unwrap the leaves and eat from the little packet. The mushrooms are intentionally over-seasoned, because they impart their flavor to the rest of the ingredients and become wonderfully chewy during the long cooking process. I happened to have raw peanuts on hand because Tim is from the south and is obsessed with boiled peanuts, but feel free to omit these, or do an experiment with roasted peanuts! Next time, I want to try a version with purple sticky rice, and maybe add some sweet tofu skin or preserved black beans.

Try my version or use this recipe as a rough template and throw in whatever ingredients inspire you. I haven’t tried it, but the internet says you can cook these much faster in a pressure cooker!

1 lb mushrooms (I used a combination of oyster and cremini, but I imagine any wild mushrooms or shitakes would be great)

2 days before you assemble the Zongzi, trim both ends of the bamboo leaves and soak them in a bucket of cold water.

Combine the rice, peas, and peanuts in a bowl, and soak in cold water for at least 40 minutes, or overnight. (The soaking time will probably have an effect on the cooking time.)

Cut 10 long pieces of twine (about the length of your arm span) and tie them loosely to an easily accessible anchor in your kitchen. I used a cabinet handle.

Cut the mushrooms into bite-size pieces. Heat a wok or frying pan over high heat and add the oil. Stir fry the mushrooms until they are deeply browned, about 10 minutes. Lower heat to medium, add the ginger and garlic, and fry for another 2 minutes, shaking the pan to ensure the garlic does not burn. Add the soy sauce, wine, and maple syrup, and cook until the liquid has absorbed into the mushrooms. Turn off heat and stir in sesame oil.

I had a really hard time understanding these directions in written form, so if you’re confused, watch the video I linked to in the post. That said, I’ll do my best to describe.

In your non-dominant hand, lay 2 leaves out horizontally, shiny side up. Overlap the tops (the pointier part) of the leaves by about 2 inches, to make one very long leaf. Pleat the leaves in the center of where they overlap and bring the wider ends up. You should have a pointy cone at the bottom, with sort of overlapping bunny ears at the top.

Scoop ¼ cup of the rice mixture into cone, add a couple of mushrooms, and top with another ¼ cup of rice. Fold the bunny ears down and around the filling with your free hand, while using the hand that holds the zongzi the fold the edges inward. If you are the competent woman in the YouTube video I watched, you’ll do a magic trick where you neatly fold the remaining material to one side. If you are me, you’ll use a third leaf to wrap around this package and secure it, winding up with a rectangle. Wrap your assembled twine tightly around the leaves twice in both directions, tie a knot, and cut the string off of whatever you tied it to.

Place the zongzi snuggly together in a medium pot and cover almost the top of the highest layer with water. Simmer gently for about 3 hours, then open one to check it. You want the rice to be fully cooked, soft and compressed, but not turned to mush. Serve hot, warm, or at room temperature, with additional soy sauce and toasted sesame oil for drizzling.

Former pasta maker, restaurant manager, and book conservator. Channeling my passions for food and writing into finding creative ways for people to incorporate more whole plant foods into their diets. I love noodles and I never shy away from a dad joke. View all posts by barenoods

One thought on “Zongzi, or How to Stay Busy During Quarantine”